skip to main | skip to sidebar

In the Immortal Words of Joey Tempest ...

It's the final countdown.

But in the meantime, this weekend my friend Lou created—using saws, kerosene, and several enormous pumpkins—a scene in his front yard that must have thrilled every kid in the neighborhood, and probably many adults as well (the ones who weren’t freaked out by the potential for neighborhood-wide conflagration).

Am I overstating things to say this diorama of carnage is a quintessential American art installation? It’s over-the-top, absurd, funny. It simultaneously represents and parodies our obsession with violence and spectacle. It honors the value of work—this took hours and hours to create. And most of all, it values the audience: Why spend the time to do this thing at all, if not to create a reaction of horror, amusement, and, dare I say, delight? 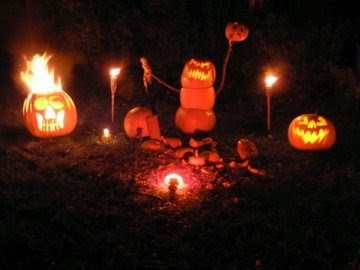 On to Americana of a larger scale: This weekend, the book review sections of both the Washington Post and the New York Times carried articles about presidential reading habits. (They also both carried reviews of a novel called The Flying Troutmans, and in an all-too-common scenario, the Post’s critic loved it—“Toews has created such an engaging cast for this 2,000-mile trek that you'll never be tempted to ask, ‘Are we there yet?’—and the Times critic panned it—“a journey of a few thousand miles that ends up seeming like several million. I blame the disagreeable company and the vapid conversation.” But I digress.)

The Post piece is a review of a recent book by Fred Kaplan on the literary works that shaped Lincoln, Jon Meacham’s a general round-up of reading executive habits that comes around to focus on McCain’s for Hemingway’s hero in For Whom the Bell Tolls and the fact that both candidates share a tragic sensibility; Meacham covered much the same ground in two NPR pieces this week, though the NPR pieces delved more deeply into the Obama and McCain autobiographies.

Both articles are worth a read, but the few extracts Jonathan Yardley quoted from the Lincoln book seemed particularly germane at this moment. First, Lincoln himself, writing in 1855:

Then Kaplan himself, writing about Lincoln’s preparation through books:

"If intellectual readiness is everything, he was ready, as he well knew when he said goodbye to his Springfield world, having prepared himself over a lifetime to become a well-read master of the human narrative. If that narrative was to have its tragic dimension in Lincoln's failure, despite his talents, to prevent the South's secession, shorten the inevitable war, or alleviate Northern racism, it was to be an object lesson in the limitations of language rather than a failure in preparation. At the same time, the unfortunate givens of the narrative provided the context for his two greatest achievements, the Gettysburg Address and the second inaugural address, in which he did what great writers do: create useful texts from which readers can derive inspiration, literary pleasure, and universalizing direction."

Nice. In my moments of fear that the polls are wrong or that the Karl Rovian plotters are about to launch some massive smear campaign (“Obama Found Sharing Cup of Borscht in Gay Love Nest With Reverend Wright”) in these last hours, I console myself with this: Even if Obama doesn’t win, isn’t it nice that, either way, we’ll again have a president who reads?

I don’t know why, exactly, but this Donald Justice piece from his 2004 Collected Poems struck me as relevant, right now. It’s the last stanza in particular that seems, to me, to sum up this moment of great hope.

2
Orpheus hesitated beside the black river.
With so much to look forward to he looked back.
We think he sang then, but the song is lost.
At least he had seen once more the beloved back.
++++I say the song went this way: O prolong
++++Now the sorrow if that is all there is to prolong.
3
The world is very dusty, uncle. Let us work.
One day the sickness shall pass from the earth for good.
The orchard will bloom; someone will play the guitar.
Our work will be seen as strong and clean and good.
++++And all that we suffered through having existed
++++Shall be forgotten as though it had never existed.
Posted by M. C. Allan (Carrie, to most) at 6:25 PM

Check out my art on Etsy!